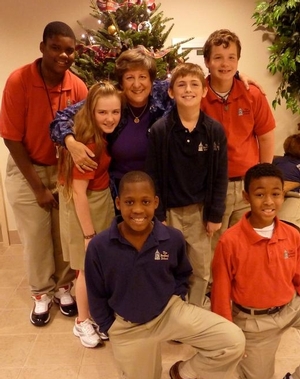 The Bedford School began in 1985 as the fulfillment of a longtime dream by its founder, Betsy Box. Her passion to help students with dyslexia began as she studied and worked under Dr. Charles Shedd at the Reading Research Foundation in Berea, KY. She then pioneered a program for students with learning disabilities at Woodward Academy in College Park, GA in 1971 and taught there for 14 years. Dr. Box and her staff expanded this successful program into a summer camp, Squirrel Hollow, which was first held on the campus of Atlanta Christian College in East Point, GA in 1981. Students received individualized academic tutoring as well as recreation and social skills in a camp atmosphere. A group of parents who were so excited by the improvements in their children expressed the need for a full-time school specifically for children with learning differences.

In the fall of 1985, The Bedford School opened its doors to 36 students, located in the facilities of Southwest Christian Church in East Point, GA. Within 5 years, Bedford outgrew its space and relocated to a building on the campus of Atlanta Christian College in the spring of 1991. While the school continued to grow and develop over the next 11 years, Bedford purchased 46 acres of land in Fairburn, GA. After many months of planning and construction, Bedford moved into its own new home in May, 2001. The Bedford School continues to expand its facilities and enrich its curriculum as it serves students with learning disabilities and their families.